The Case of Bob: A Stray Puppy and Limited Government

Three and a half years ago, my dear husband bought me a German Shepherd puppy we named Argos. Argos is a very good boy and has grown into a ninety-pound giant who is afraid of garbage trucks. He is gentle and sweet and makes friends wherever he goes. He’s a sociable fellow and loved to run up and down the fence line with the dogs next door. Sadly, the neighbors moved away last summer and took the dogs with them. Argos has been bored for months. Jonathon and I began to think we ought to go looking for a dog at the local shelter to bring home and add to the dog hair and muddy paw prints—so Argos would be less mopey. But money was an issue. We really couldn’t afford to pay out money to obtain a dog, even a shelter dog, after all the medical bills last year. So, we decided to put the idea on hold until sometime later this year.

And then I did a stupid thing. I prayed, “Lord, maybe you could just send a dog our way that needs us? Just have it show up at the door?”

Some weeks later, on January 30 to be exact, I put Argos out in the yard one last time before bringing him in for the evening. Twenty minutes later, I went to the door to call him in, and he didn’t come. In the darkness, I could hear him running around in the yard, but he was ignoring me which is not like him. I thought he was probably distracted by some critter outside, and he was. As I looked closer, I could see a small white dog on the other side of the fence nosing Argos through the wires. I went to the side door and opened it to get a better look at this dog, and in walked Bob. (Of course, I didn’t know his name was Bob at the time.)

His tail wagged furiously and he fairly quivered with excitement. He was painfully thin. So, I fed him.

Now what? I had this strange dog in my house, and I suddenly wished I’d never seen him to begin with or let him walk into the house. Because now, I had to decide what to do with him. It was very late, and I was standing there with wet hair out of the shower wearing my pjs and slippers. I did not have the energy or stamina to take him outside and go house to house to find his people. But I figured he must have belonged to someone because he was wearing a collar, albeit no tags. At this point, Jonathon and I were faced with three options. 1. Take the dog in for the night and try to find his people later. (This option presented the very real possibility that we’d get stuck with him for good.) 2. Send him back outside and hope he found his way back home. 3. Keep him for the night and call animal control in the morning to take him off our hands.

We opted for choice number one, and nearly a month later, he’s still with us. Several neighbors told us with certainty that he belonged at the house around the corner from us. So, we took him there and the occupants denied he was their dog. The folks who live there have issues. Most likely drug and alcohol related issues. We’re pretty sure they are lying and just don’t want the dog anymore.

“What a couple of softies!” you’re probably thinking. And you would be right. But believe it or not, deciding to keep Bob was not impulsive, and depending on how things go, it may not be permanent.

You see, I did a very quick assessment of this dog the moment he walked into our house. He had about two factors in his favor weighed against a whole lot of stuff not in his favor. The pros and cons are as follows:

So, why (with Jonathon’s wholehearted permission) did I keep this dog? Well, because my worldview demands it.

Jonathon, as many of you know, is the Representative for SC House District 8. Because of his legislative responsibilities, this family unit of ours lives, eats, and breaths politics. My job, as I define it, is to help Jonathon to become the best representative to his district he can be. To that end, I think about politics all the time so that I can understand and help. We’re a team that way. Limited government is one of those things I think about all the time.

When the government has to swoop in and take over citizen’s responsibilities, it frequently does so badly. OR it does so fairly well but raises taxes in order to do it, as well as removes the freedom of choice from individuals. Worse, it creates an ever-growing population of people who rely on the government to do the things they should be doing. Pretty soon, folks stop looking at such things as personal responsibilities and relegate them to the government permanently.

For example…Let’s say you have a neighbor who lost his job. He’s trying to get unemployment, but the wheels of bureaucracy run exceedingly slow. So, he’s down to his last five bucks, bills are due, food is running low. What do you do for him? Well, a lot of people won’t even know the guy’s name, because we don’t take time to get to know our neighbors anymore. But even if you did know, he doesn’t feel comfortable telling you about his problems because there’s a government program out there for him and he doesn’t want to impose on you. If he just gets his paperwork processed, his problems will be over. So, he doesn’t tell you…until things are in such a terrible state that he gets evicted and thrown out on the street. And he still doesn’t tell you because he’s not allowed back, and you go on wondering why the house next door is suddenly vacant. But then your taxes shoot up dramatically to pay for the government program that was supposed to keep him solvent, and you lose the opportunity to love your neighbor as yourself by taking money out of your literal wallet and cans of food out of your literal cupboard to help him through his time of need.

A more extreme example is the oft-told true story of the woman who was stabbed to death on her own porch in the middle of a populated neighborhood. Many people heard her screams and cries for help, and no one came to her aid. No one. Not because they were hard-hearted people, but because they assumed someone else was doing something about it. Someone else had surely called the police. Surely, the police would be there at any moment. There was no need to put themselves at risk by getting involved. It was someone else’s problem. It was the government’s problem.

So, here are the reasons I kept Bob: 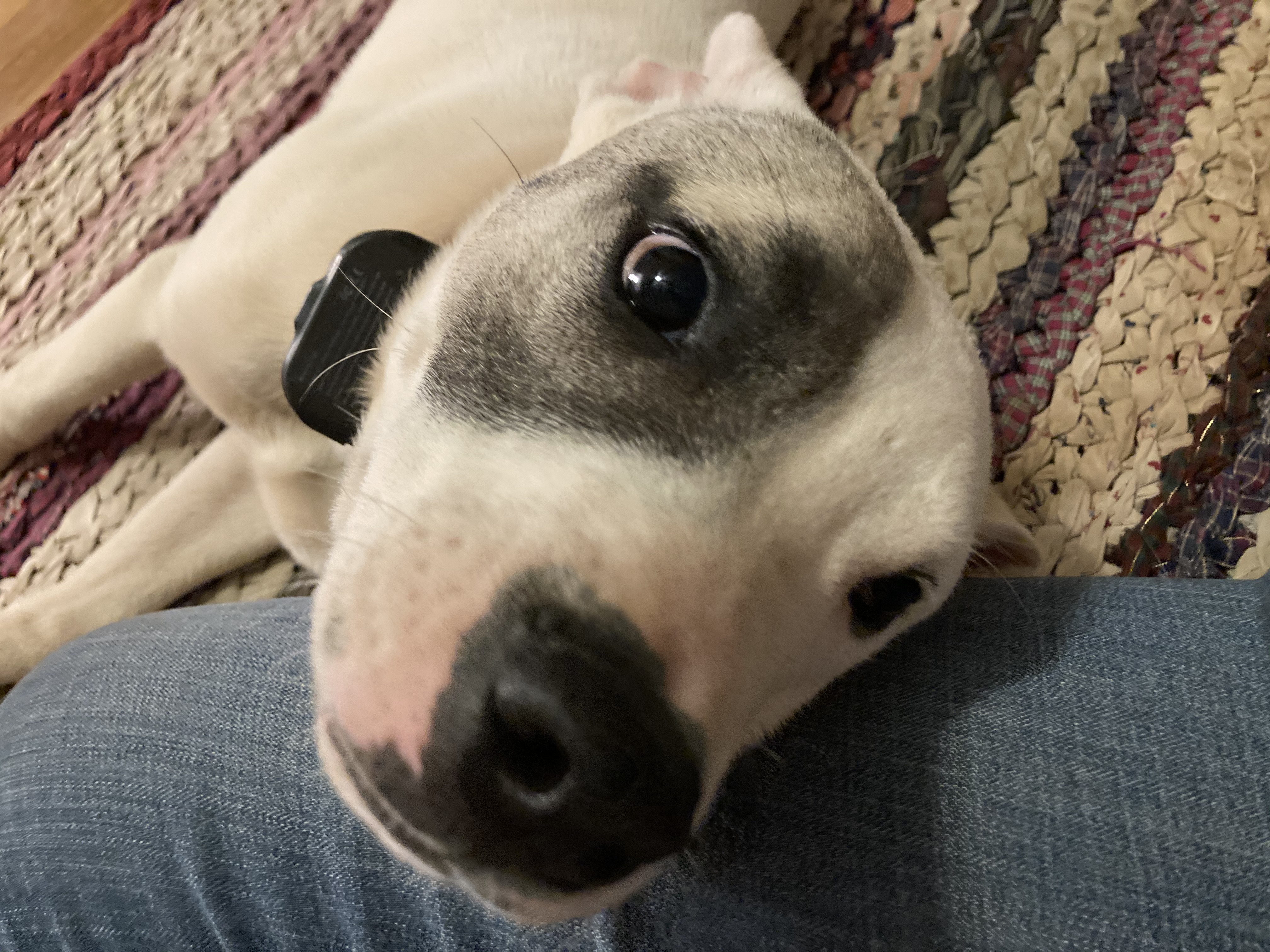 I’m not going to lie, we’ve had some tough times with this stubborn little guy. He has many survival traits that keep mucking up the works. He has started many fights with Argos due to resource guarding. I have cleaned pee and poop off my floors many times. I have spent many hours working with him on obedience. I have spent hours consistently correcting him for jumping on people, trying to dominate Argos, trying to chew up unapproved objects, breaking out of the fence, pulling food off the counter tops, jumping on the couches, and many other undesirable traits. I have washed innumerable muddy pawprints off my floors. Jonathon and I have gotten up early each morning to give both dogs a looooooonnnnnngggg energy-draining walk. (A good dog is a tired dog.) And we do not enjoy early mornings. But it’s all paying off. He has come a long way in four weeks. He and Argos are getting along better day by day. 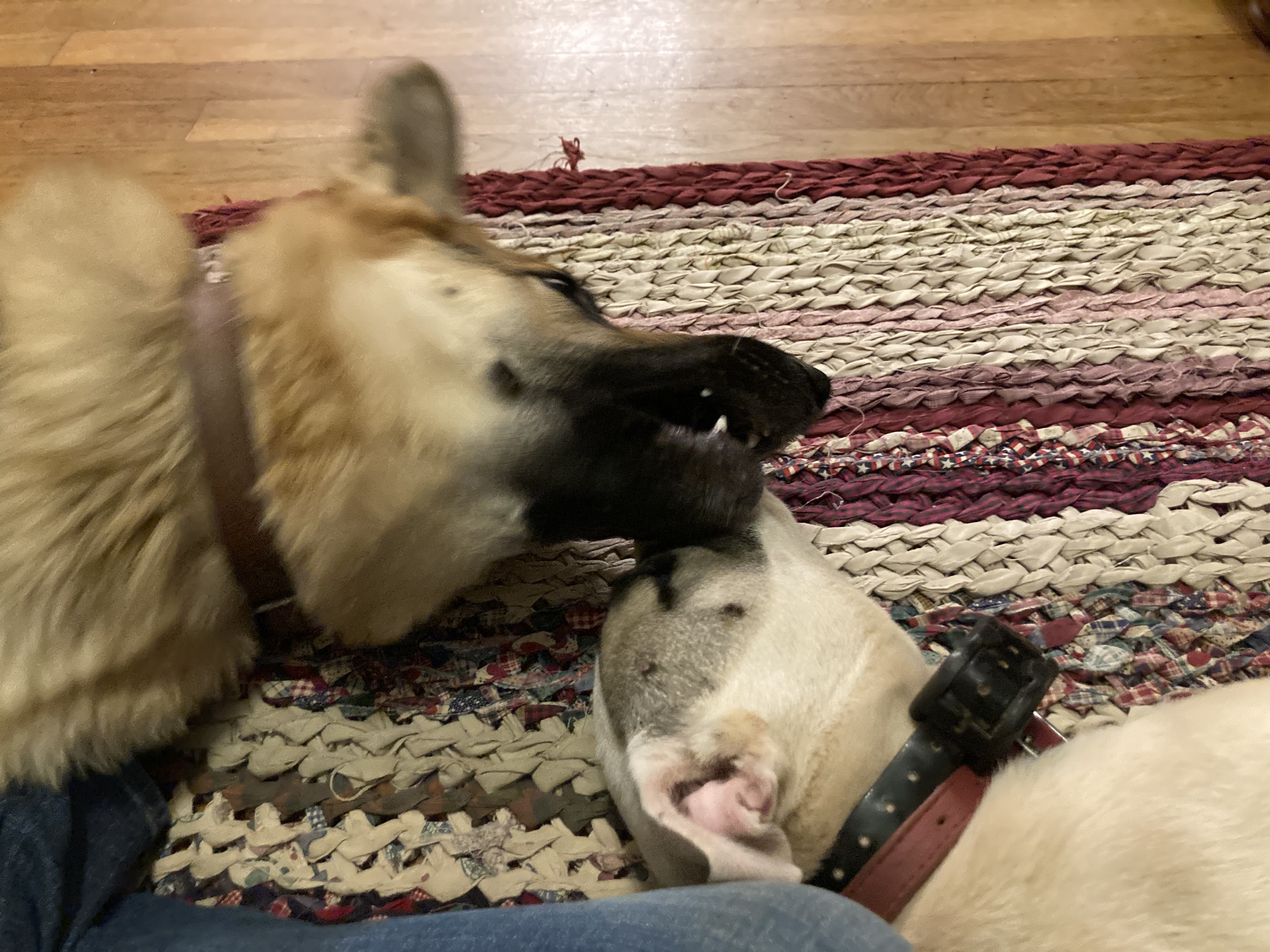 I told the vet yesterday at Bob’s appointment that I still didn’t know exactly whether it was going to work out. But I was going to do my best by Bob. I said I wasn’t giving up on him unless I had tried absolutely everything. A shelter will be our very last resort. 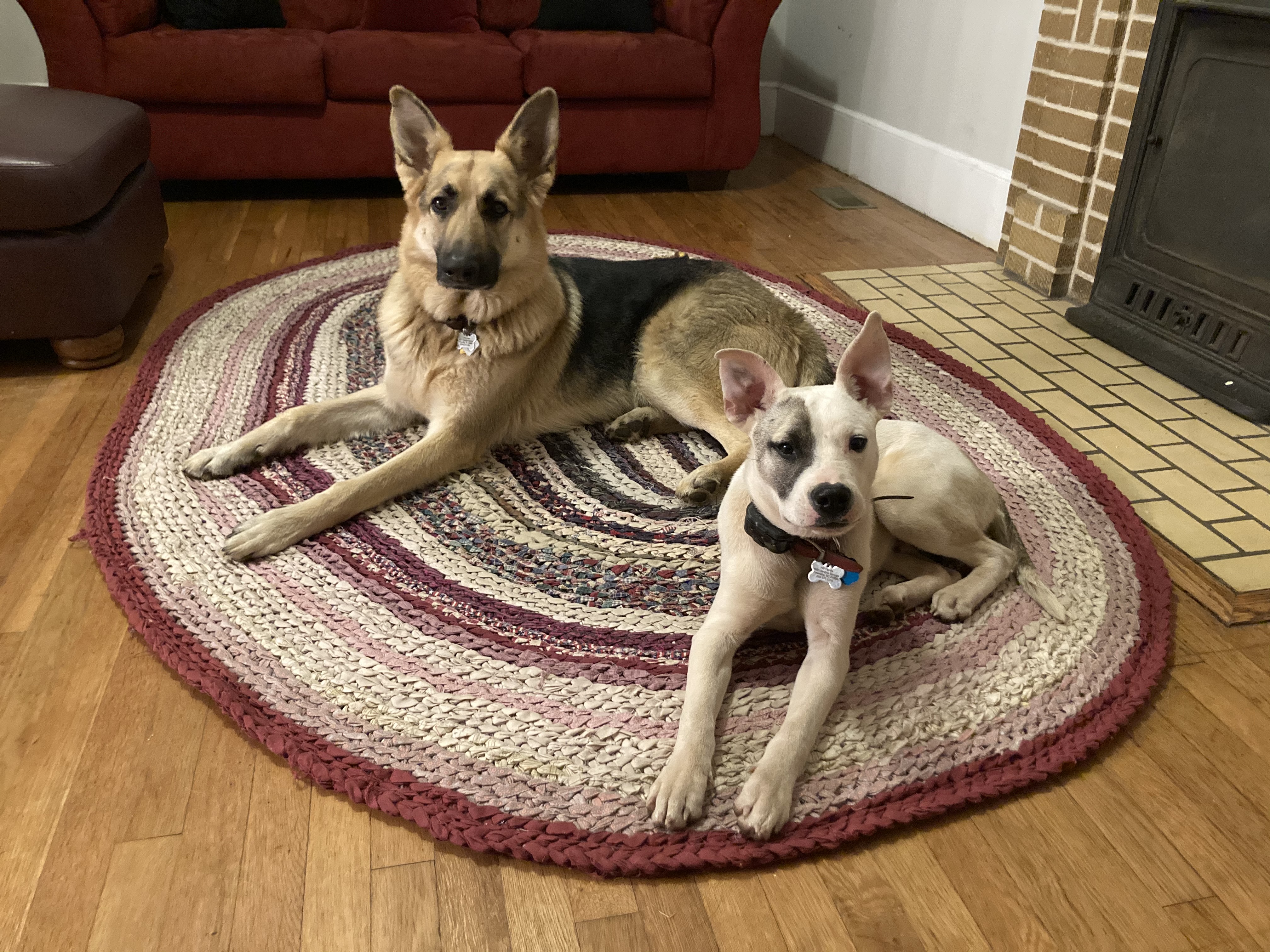 I realize not everyone is able to take in a stray. If you are a farmer, for instance, you probably should not take in Bob, for your livestock’s sake. Of if you really dislike animals, taking in strays is probably not for you. But everyone has a talent or ability or the resources to ease some burden somewhere. Think about it. What need can you meet to shrink the size of government? It just boils down to loving your neighbor, and there are about as many ways to do that as there are people in the world. 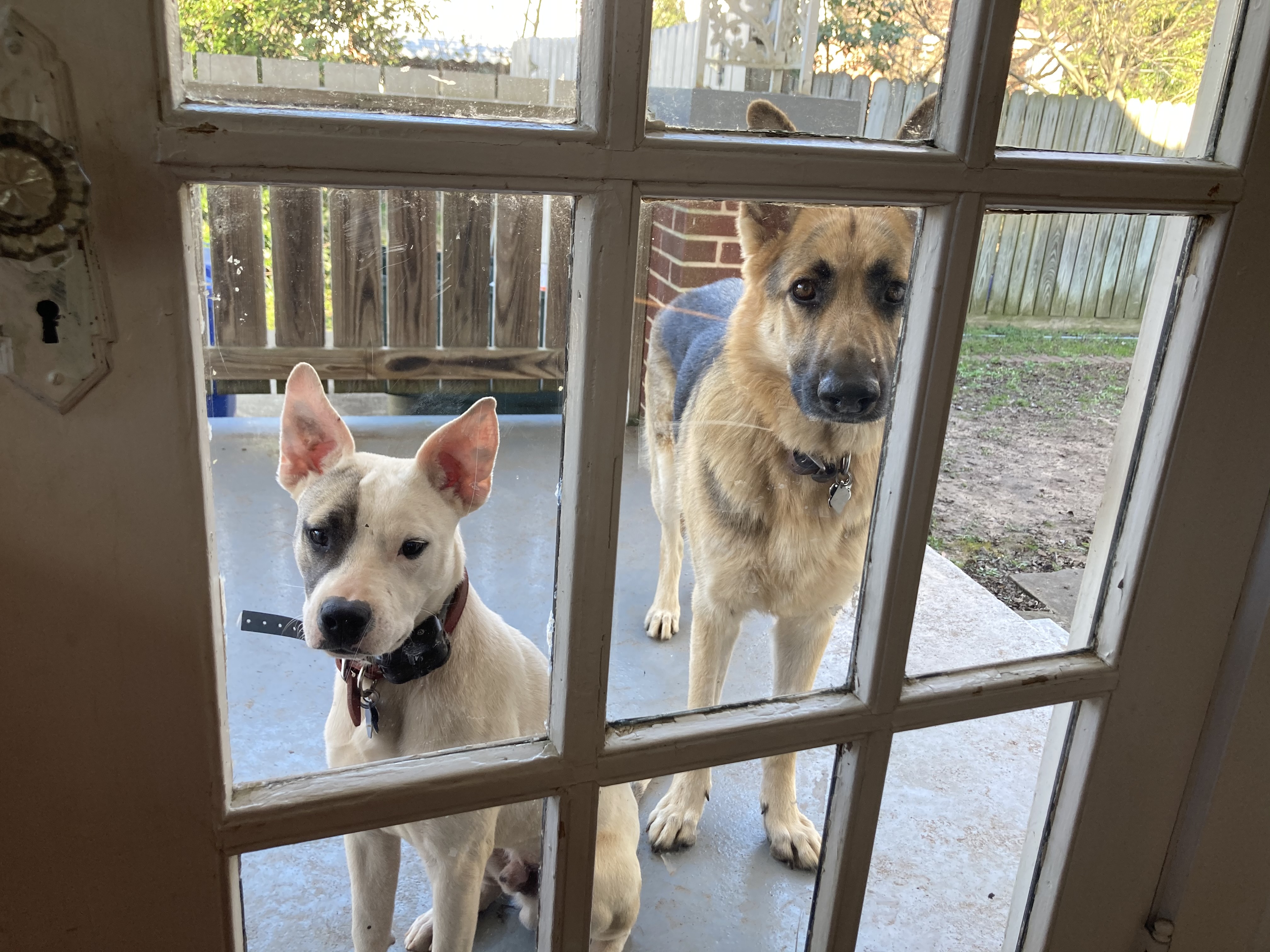 P.S. People keep asking me, “Why, Bob? Argos is such a regal name. Bob? Really?” Well, I did it because juxtaposing Argos with Bob makes me chuckle. That’s it. No other reason. Besides, just look at him. Doesn’t he look like a Bob? Or Steve? Or George? But, if you must have regal, just think of him as Robert the Bruce and Bob for short.

Next time, come back and read about how Bob is helping me confront my anxiety…again. 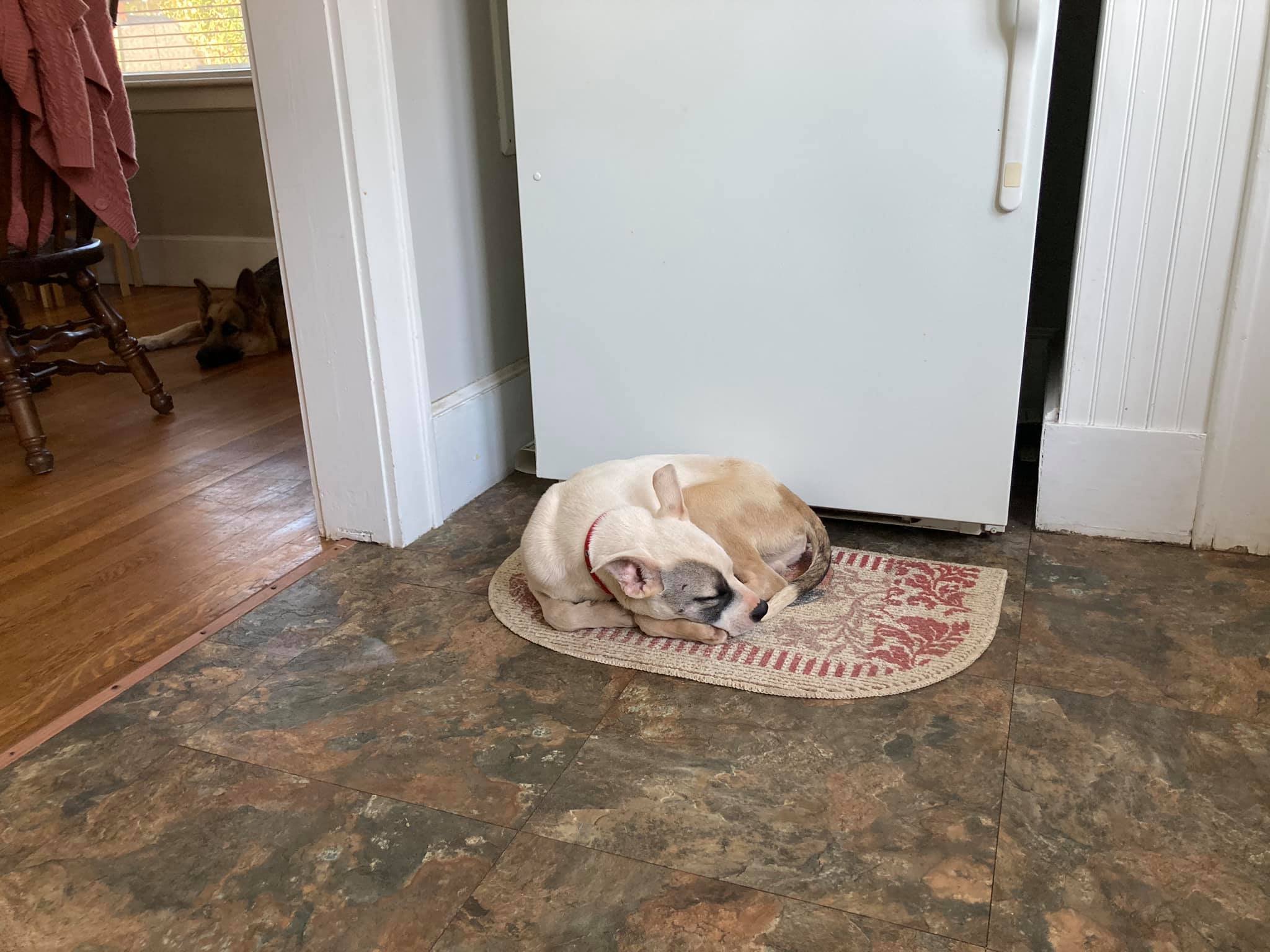